We are backed up on recone projects, please be advised if you send

in a recone, it may be a while.  Thank you for your patience.

Vox amplification has been a staple for guitarists since their introduction. The British Invasion rocketed the company to prominence in the 1960s, and their amplifiers have backed such high-profile players as The Edge, Brian May, Tom Petty, and John Scofield. The AC15 is among the most recorded amplifiers in history because of the chime and sparkle it delivers. 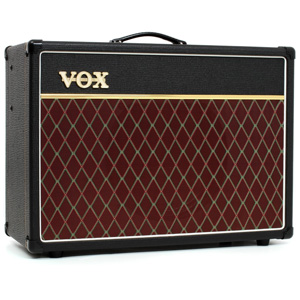 40oz ceramic magnet, 1.75" voice coil diameter.  This speaker is the classic Vox tone in a ceramic design (which will fit in the amplifier!) Full, clear tone with top end that isn't spiky or harsh.  This speaker brings out the best features of the amp, while keeping the treble under control.

Same 40oz magnet and 1.75” voice coil but with a cone/spider construction that focuses on the lowed mids and tight low end.  The treble is still there to cut through a dense mix, but the emphasis is definitely on the throatier lower end of the spectrum.