We are,currently, training 2 new speaker builders..  until we get them up to speed, we will have 10 day production que.  We apologize for the delays.. we build one at a time.. no assembly lines !

Vox amplification has been a staple for guitarists since their introduction. The British Invasion rocketed the company to prominence in the 1960s, and their amplifiers have backed such high-profile players as The Edge, Brian May, Tom Petty, and John Scofield. The AC30 was introduced in 1958 to meet the growing demand for louder amplifiers. Characterised by its jangly high-end sound it has become widely recognized by British musicians and others. 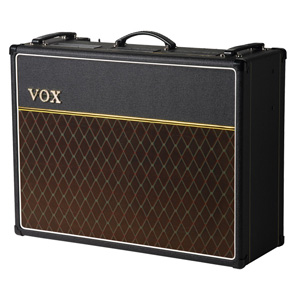 40oz alnico magnet, 1.75" voice coil diameter.  This speaker is the classic Vox tone in every way. Full, clear tone with top end that isn't spiky or harsh.  A pair of Blue Dogs really brings out that jangly Vox tone that the early AC30's were known for.

Try pairing the Blue Dog with a Silver Bell for a wider range of tones.  The Silver Bell has the same 40oz magnet and 1.75” voice coil but with a cone/spider construction that focuses on the lowed mids and tight low end. These two speakers blend well in the midrange to give you an overall full sound with great harmonic content. A battle-tested combination.