Designed for use with 60w amplifiers and lower.

This attenuator has two knobs for tonal control. The main volume is controlled by the Lows-Mids knob. Then to control the treble, use the Mids-Highs knob. The treble control is always dependent on the main volume control. Be aware that the higher the setting on the main knob, the less the effect of the treble compensation. For instance, if you turn the main knob all the way to 10, you’ll notice very little change in the tone as you turn the treble compensation from one end to the other. The line out signal is dependent on your amplifier settings.

May be used on 4, 8, and 16 ohm amplifiers. Includes MASS bypass, line out, extra output jack, and range switch. Two power level controls, one for the bass-mid frequencies and one for the upper mids-treble frequencies. They may be adjusted independently for the best tone at all levels of attenuation. These controls affect the actual signal going to the speaker, not the line out signal. So, it is like having high level tone controls. The controls are very effective and the tonal combinations are virtually infinite. Because a MASS motor is employed, a more realistic interaction between the attenuator and the output circuit of the amp occurs. The attenuation is continuously adjustable from-3dB to over -70db using speaker control and the range switch.

Like all Weber attenuators, setting the speaker control to minimum (maximum attenuation), allows the MASS Lite to be used as a dummy load for testing or for DI use.

Optional wings may be employed for rackmounting the MASS Lite. Attach these wings to the sides of your attenuator, and you can mount it in a standard 19″ rack.  Uses two rack spaces. Must place the attenuator on the topmost spaces of the rack to allow proper ventilation. 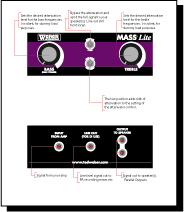 Line Out jack has no volume control and is dependent on your amp volume setting, but we do offer a Line Level Volume Control here:

There is an option to add a headphone output, and this adds an extra jack with an independent volume control. For the footswitch option, we install a relay which requires 7.5V external power. This only powers the relay – the attenuator itself is still passive. We include the power plug but the footswitch itself is not included. You can use any latching footswitch, including one incorporated in a multi-effect floor unit.

This item is hand-built to order, to ensure the best attention to detail is paid to its construction.  We build them one at a time, on a table – not hundreds at a time on an assembly line.  This allows us to reduce the margin for error and produce an overall higher-quality product.  Please allow at least 7-10 business days for your order to be built and then shipped.

IMPORTANT NOTE ABOUT HIGH GAIN AMPS*: *if you have a Fender or similar amp, and play with cleaner tones, this part does not apply to you. High gain amps such as Marshall or clones (with heavy distortion) are hard on attenuators. Unfortunately, an amp’s volume dial is not a good indicator of how much power is being produced.  Many amps can reach full power at 3 or 4 on the volume dial, so it is a good suggestion to get an attenuator with 4x the power handling. For example, if you have a 50w high gain amp, you should opt for the MASS 200. If you have a 100w amp, you should still go with the MASS 200 but you should not crank the amp.

2) also do not turn your amp all the way up.  even if you’re just knocking a little off the top with the attenuator, it’s a good idea to keep the amp somewhere in the middle at most.  it’s best to find the lowest volume on the amp that is the acceptable tone to you, and then use the attenuator to bring it the rest of the way.

More often than not, your amp’s output is more than your ears can handle.  To maintain the tone of a cranked amp with saturated tubes and output transformers, a device called an attenuator is placed between the output of your amp and the speaker.  Weber offers a variety of attenuators for different applications.

Please read and consider the following prior to ordering an attenuator:

(The following text is reprinted with permission from Eurotubes.)

Here are some facts to consider when using an attenuator. Attenuators do work. They are not the cause of transformer failures. An attenuator can only simulate two out of the four components that are involved when you crank up an amp. The four components are #1 preamp tube distortion, #2 power tube distortion, #3 speaker distortion and #4 the physical movement of air that your speakers produce at high volumes. So the two components missing are speaker distortion and the physical movement of air and these are huge components! So if you’re playing at moderate volumes and just want to tame the amp down to get a bit of power tube breakup then an attenuator is a great tool, but do not expect to be able to dime your amp and then use any attenuator on the market to get the exact same sound from your amp at whisper quiet volumes. You can’t get there from here. You would be better off with a one watt amp.

So, now some answers. Catastrophic power tube failure will cause transformer and screen grid resistor failures. The reason you will read and hear horror stories from un-knowledgeable attenuator users is because they do not understand how attenuators work and the stress they put on your tubes. If in fact, a player chooses to run his amp cranked all the way on and attenuate the volume down to a whisper, then in most cases power tubes will only go a few months. Power tubes will die in one of two ways. The first and most pleasant is by simply fading and dying. The second and more popular way is to go out in a blaze of glory which is what I referred to above as a catastrophic failure which can and most often will, take out screen grid resistors.

Tubes sound great when they are really working hard but the harder you work them the faster they wear out. If you understand this and either use the attenuator sparingly or change your tubes regularly then your amp will not suffer damage.

If you are going to dime your amp out and attenuate it down to very quiet volumes then we recommend using an attenuator that is rated for twice the power of your amp’s rated output.

If you are simply going to dial an amp up to where it starts to breakup in the clean channel and then knock it down a few dB so the club owner and the sound man are happy, then using a 50 watt attenuator for a 50 watt amp will be ok.

A note about the power level: You should select an attenuator that can handle at least as much power as your amp puts out.* (see FAQ)

Amplifiers are generally designed to operate clean, and most manufacturers specify the output power as clean power. When you run the amp full blast, the output devices actually become more efficient because distortion is not considered. Under those conditions, the amp may be capable of putting out as much as 50% more power than its rated clean power. Be aware of that when choosing an attenuator, because the idea of using an attenuator is to run the amp full blast into power tube distortion and then controlling the level going to the speaker. If you are going to dime a 50 watt amp, you should choose a 100 watt attenuator.

Understanding Attenuators
An article by Michael Farnsworth
This is a wonderful article written by one of our customers, which explains attenuators in even more depth.
CLICK HERE TO READ IT

Be the first to review “MASS Lite 100w Attenuator”